Island-hopping from Athens how to, plus the best trips to the mainland

Island-hopping from Athens and trips to the Greek mainland are arguably some of the best things to do during your stay in the Greek capital!

Either you opt for a quick excursion to the Saronic islands, a complete island-hopping itinerary to the Cyclades or a quick getaway to the Greek mainland, we’re going to give you all the essential information to do it like a pro!

So, keep reading to find out the best destinations for island-hopping from Athens and mainland excursions from Athens! 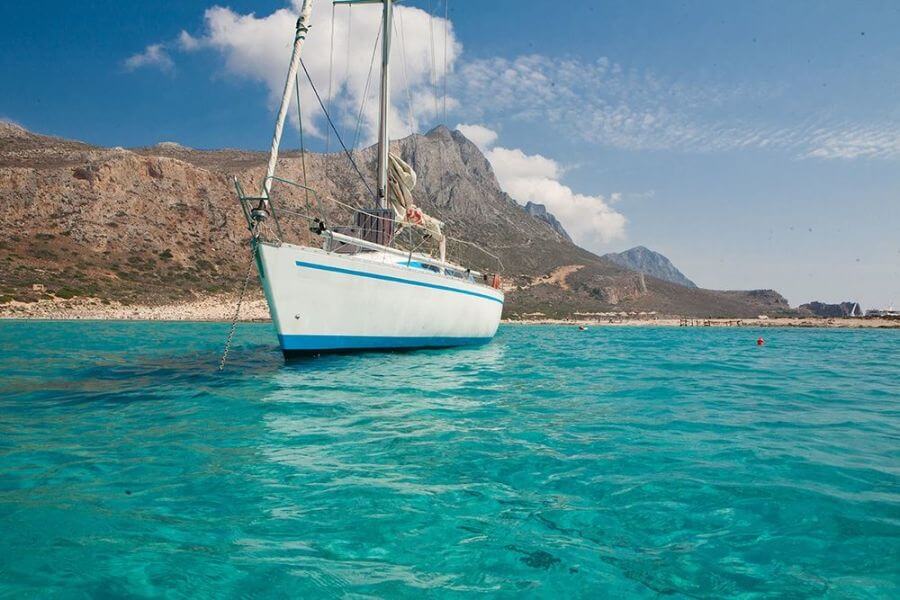 Island-hopping from Athens to Poros

Island-hopping from Athens to Poros and the rest of the Saronic islands is a must. Thanks to its proximity to the Greek capital, Poros is one of the most popular destinations for quick getaways.

Poros island is just 1-1.5 hours away from Athens, so it’s perfect for a day cruise. It is a tiny island that has lush vegetation, beautiful beaches, and a picturesque main town. Poros is a relatively quiet island, even during the peak season. However, it tends to get crowded during the summer weekends.

Ferries to Poros depart from Piraeus every day throughout the year. In the summer months, there are frequent connections (4-6 per day) between Poros and Athens, Hydra, Spetses, Porto Heli, Hermione, and Metochi. The types of ferries that sail from Athens to Poros are conventional ferries, flying dolphins, and small catamarans.

Island-hopping from Athens to Santorini

Well, this is one of the most popular island-hopping itineraries in Greece, especially during the summer. Santorini is connected to Athens via the Piraeus and Rafina ports.

Santorini is 5-8 hours away from Athens, depending on the type of ferry you’re traveling with (conventional or high-speed/ catamaran). Worldwide famous for its breathtaking sunset, dramatic caldera, and lunar landscape, Santorini is a picture-perfect island. It attracts millions of tourists every summer, so it can get crowded in the peak season. If you want to avoid the crowds, we suggest you visit the island in May or September/October.

Ferries to Santorini depart from Piraeus port every day throughout the year. In the low season, there are 1-2 ferry connections per day, while in the peak season more than 5. The types of ferries that sail from Athens to Santorini are conventional and high-speed/

catamaran ferries. A conventional ferry needs 8 hours to get to Santorini, while a high-speed approximately 5.

Island-hopping from Athens to Paros

Paros is one of the up-and-coming islands of the Cyclades island complex! Known for its vivid party scene, traditional Cycladic architecture, and water sports activities, Paros is a must destination, especially for young people. You can visit Paros directly from Athens, or as a part of an island-hopping itinerary to the Cyclades. Other popular destinations for island-hopping from Paros are from Paros to Naxos, Santorini, and Mykonos.

Ferries from Athens to Paros depart daily from Athens throughout the year. In the peak season, there are approximately 4 ferry connections per day, while in the low season 1-2. The duration of the trip is 3-4.5 hours depending on the type of the ferry (conventional or high-speed).

Island-hopping from Athens to Naxos 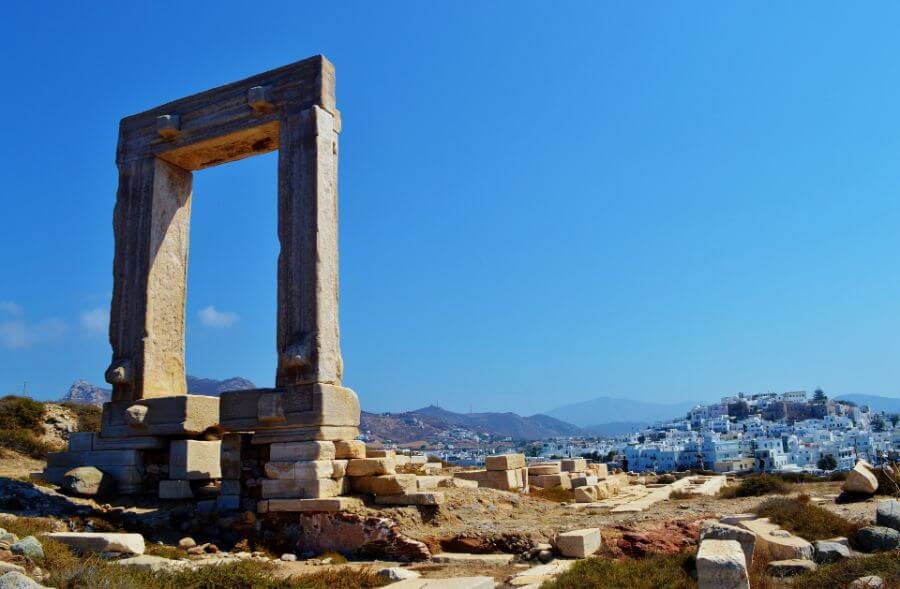 Naxos is a beautiful Cycladic island very close to Paros, Mykonos, and Santorini. Popular for its beautiful natural landscape, traditional architecture, archaeological sites, and delicious cuisine, Naxos is an island that somehow manages to have it all! Being the largest as well as the greenest island of the Cyclades island chain, Naxos offers plenty of options of things to do and a diversity of landscapes!

Trips from Athens to the mainland

Trips from Athens to the mainland are great for exploration during the winter and the autumn when the weather doesn’t permit excursions to the islands. Athens boasts an ideal location, as it is close to many beautiful towns like Nafplion, Delphi, Epidaurus, and Meteora!

Trip from Athens to Nafplion

Nafplion is one of the most popular destination for day trips from Athens! Located in Argolis, Peloponnese, Nafplion is a picturesque coastal town that never fails to enchant visitors. Famous for its traditional architecture, archaeological sites, and Medieval aura, Nafplion is one of the most beautiful towns of Argolis. What’s more, it’s just 137 km away from Athens, which means it’s very easily accessible by a car or a bus.

Since Nafplion is close to the archaeological sites of Delphi and Epidaurus, we recommend renting a car from Athens and embarking on a road trip to Argolis. During your road trip, you’ll get the chance to visit not only Nafplion but also other sites of great historical value!

Trip from Athens to Delphi 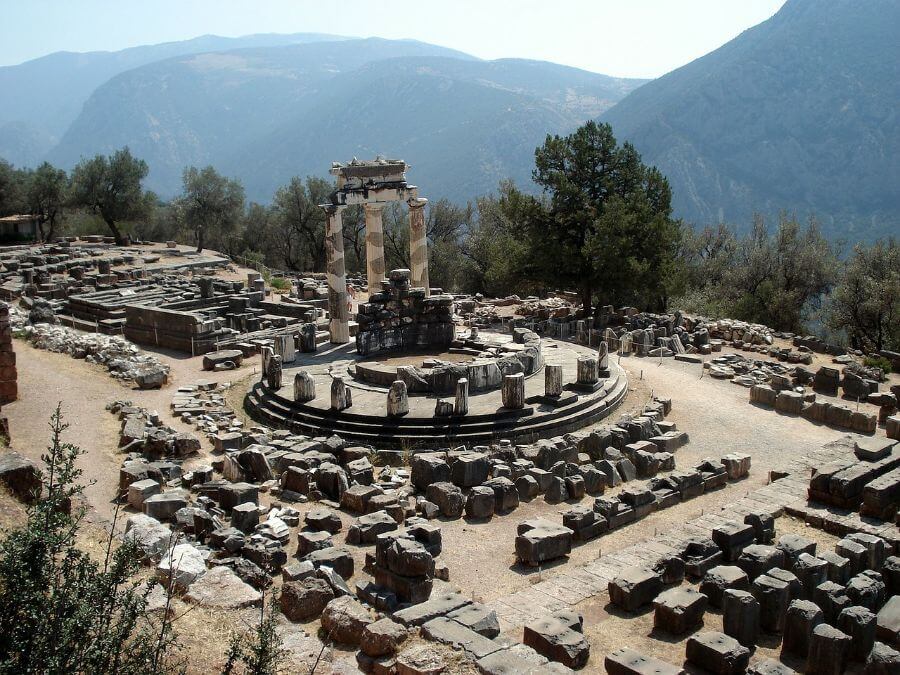 If you are a history buff, a trip from Athens to Delphi is an absolute must! Also known as the navel of the earth, Delphi is one of the most important archaeological sites in Greece. That’s because of the oracle of Delphi, which is located on the slopes of Mount Parnassus and was famous in the ancient world. Some of the monuments you’ll find at the archaeological site of Delphi are the Temple of Apollo, the Treasury of the Athenians, the Ancient Theater, and the Stadium.

Delphi is just 2-2.5 hours away from Athens, so you can easily reach it by car or by bus. Renting a car is the best way to get to Delphi,because this way you can combine your visit to Delphi with a visit to the nearby Nafplion and Epidaurus.

Trip from Athens to Meteora 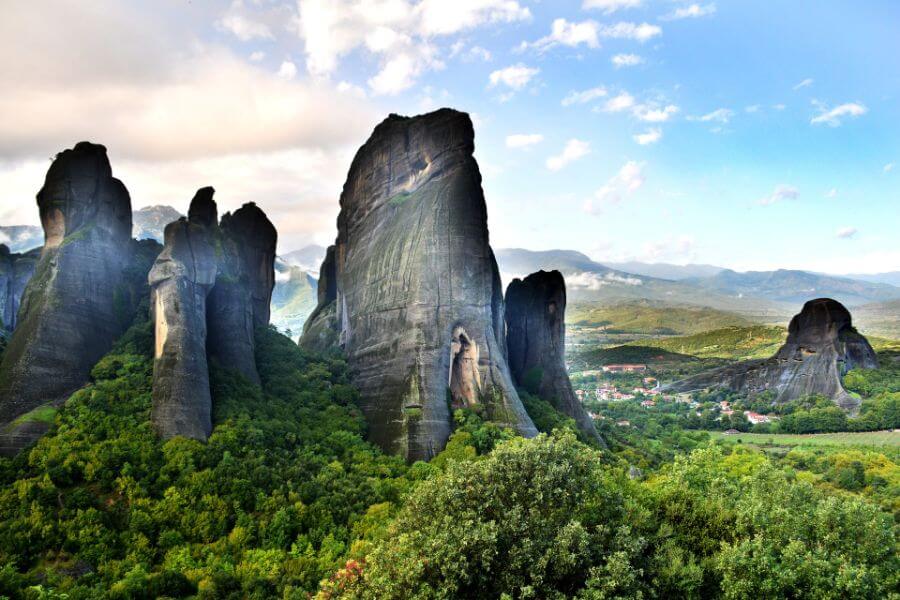 Meteora is an amazing place to visit -nothing less than a natural wonder. Meteora is a complex of towering rocks on the top which stand traditional monasteries. The combination of the wild natural surroundings with the enormous rocks creates a breathtaking scenery! What’s more, the UNESCO World Heritage Site of Meteora is the perfect place for nature exploration, climbing, and hiking.

Just 4-5 hours away from Athens, Meteora can be easily reached by car or a bus. Many travelers choose to visit Meteora after visiting Delphi, as a part of a road trip. Whatever you choose to do, we recommend staying at Meteora for at least a couple of days, so that you can explore the area to the fullest!

Recommended tour: 2-Day trip to Delphi and Meteora from Athens

To sum up, there’s plenty of option when it comes to island-hopping from Athens and trips from Athens to the mainland! No matter if you’re staying for a couple of days or more, there are many destinations for excursions the islands and the mainland. Don’t miss to explore them!

Your email address will not be published. Required fields are marked.*